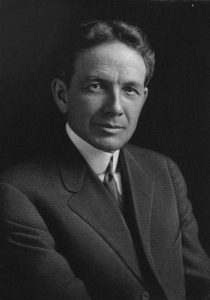 The Flint Motor Co. began as a division of Durant Motors by William Crapo Durant. Around 1922, Durant was forced to resign as president of General Motors. In an attempt to maintain General Motors’ worth, he bought most of the General Motors stock to prevent bankruptcy. Durant then purchased 100 acres on South Saginaw Street to build the “Flint Six” cars which included sedans, roadsters and touring cars. (The picture above is of a Five-Passenger “60” Touring Car). The 1.5 million square foot building, the largest of its kind in the world at that time, was finally completed in October of 1923; however, the first car was manufactured the first of October. In the first eight months of operation, the value of the company rose from the initial $5 million to an estimated $18 million. By 1926, the building proved to be too large for manufacturing operations. The same year General Motors purchased the plant for $4 million and became the largest of the Fisher Body plants. After the sale of his building, Durant moved the Flint Motor Co. to Elizabeth, New Jersey in an attempt to bolster his failing Durant Motor Company. The depression of 1929 completely wiped out the last traces of Durant’s companies. As a result, Durant lost $40 million. (1)

Tags from the story: History
Show Comments (0)
Bookmark this story